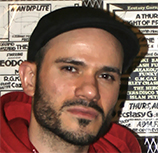 Ben Ortiz is the Assistant Curator of the Cornell Hip Hop Collection, which is part of Cornell University Library's Rare and Manuscript Collections division. The CHHC is the world's most extensive research archive on Hip Hop music and culture (a very broad subject through which a wide diversity of topics can be explored). The CHHC is nearly a decade old and continues to grow each year. It contains an estimated quarter-million artifacts!

Ben served as an inaugural member of the CHHC's advisory board upon its creation in 2007, and took on his current role in 2011. Prior to that, he worked at Cornell in other capacities including coordinator of K-12 Outreach in the Cornell Public Service Center, New York State Higher/Educational Opportunity Program Counselor in the Office of Minority Educational Affairs (today called OADI- Office of Academic Diversity Initiatives), and residence hall director for the Risley Residential College for the Creative and Performing Arts, as well as Clara Dickson Hall, and the Multicultural Living-Leaning Unit (McLLU).

In addition to his position with Cornell Hip Hop Collection, Ben is also active in the local music scene, and can be found rocking dance floors as his alter ego, DJ ha-MEEN. Other pursuits of Ben's include painting, mountain biking, and playing Afro-Cuban and other forms of percussion.