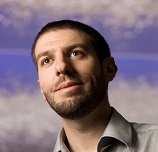 Olivier Desjardins joined the Sibley School of Mechanical and Aerospace Engineering faculty at Cornell University in 2011 after 3 years as an Assistant Professor at the University of Colorado Boulder. He holds two Master of Science degrees, one in Aeronautics and Astronautics from Supaero in Toulouse, France, and one in Mechanical Engineering from Stanford University. He obtained his Ph.D. in Mechanical Engineering from Stanford University in 2008. Olivier’s research focuses on predicting turbulent multiphase flows using massively parallel numerical simulations. His research group designs new physical models and innovative numerical methods with specific focus on liquid-gas flows and particle-laden flows.
He grew up in rural Normandy, later moved to Lyon and then Toulouse, before making his way to the United States in 2002. When he is not in front of a computer, Olivier enjoys traveling, reading, physical exercise, and spending time with his wife and daughter.