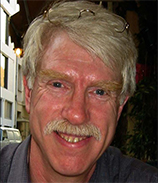 Tom Fox '71 moved into the recently demolished Class of '17 Hall in 1967. During the next four years at Cornell he fell in love with hockey, genetics, and Ithaca, among other things. After graduate studies at Harvard he moved to the University of Basel in Switzerland for several years of postdoctoral work, and then a faculty position. He left Basel to return to Cornell in 1981.

Since then he has enjoyed teaching introductory Genetics, and leading a research group, that includes undergraduates, seeking to understand how the genes within mitochondria, fascinating intracellular organelles descended from bacteria, are expressed and regulated. Tom was born and raised on Staten Island and developed a lifelong interest in biology at the nearby Staten Island Zoo, renowned at the time for its collection of rattlesnakes.

He enjoys spending time in the woods, especially around campfires. He spends too much time reading the newspaper. His other dilettantish interests include the German language, music, and interactions between scientists and nonscientists.